FMS Wertmanagement was founded in 2010 as the Federal government’s winding-up institution for the nationalised Hypo Real Estate Holding AG (HRE Group) with the aim of taking over risk positions and non-strategic operations from the HRE Group and unwinding them.

In reaction to the financial market crisis, in the autumn of 2008 the Parliament of the Federal Republic of Germany offered German credit institutions the option of transferring risk positions as well as non-strategic operations to an institution that would wind up the given portfolios and operate independently in both organisational and financial terms.

Effective 1 October 2010, FMS Wertmanagement took over from both the HRE Group and its national and international subsidiaries and special purpose entities risk positions and non-strategic operations with a nominal value of EUR 175.7 billion as well as short-term funding sources in the corresponding amount and related derivatives for hedging purposes. FMS Wertmanagement is unwinding the transferred portfolio pursuant to sound business principles in ways that maximise its value. The wind-up plan originally prepared by the HRE Group was designed for a term of ten years. Any portion of the portfolio not wound up by the end of the ten-year period was to be sold at its book value. FMS Wertmanagement has revised the wind-up plan based on the insights it has gained and, in particular, has adjusted it to the long average maturities of the portfolio’s components. The given time horizon allows FMS Wertmanagement  to unwind the portfolio whenever it is financially advantageous and thus to achieve the best possible outcome in the interest of the German taxpayer.

Article 2 (1) of the Charter of FMS Wertmanagement: “Functions, transactions, applicability of the German Banking Act”

“The winding-up institution shall take over the risk positions and non-strategic operations ('Transferred Assets') of Hypo Real Estate Holding AG and its direct and indirect German and foreign subsidiaries and special purpose entities (collectively referred to as the 'HRE Group') and both realise and unwind them in a manner aimed at maximising the assets' value for the purpose of stabilising the HRE Group and the financial market.“

FMS Wertmanagement refinances itself on both the money and the capital markets. On the money markets, it uses repos besides short-term, unsecured borrowings. FMS Wertmanagement also issues bonds and promissory notes with medium and long-term maturities.

FMS Wertmanagement is supervised by the Federal Agency for Financial Market Stabilisation (FMSA), which has extensive information, controlling, audit and instruction rights. Among others, FMSA approves revisions of its wind-up plan and is integrated into decisions of strategic importance. Whilst FMSA serves as the legal regulator, the Federal Financial Supervisory Authority (Bundesanstalt für Finanzdienstleistungsaufsicht - BaFin) plays the role of the financial regulator.

This ensures that FMS Wertmanagement will at all times be able to pay its liabilities in full and timely fashion.

FMS Wertmanagement announced that it is selling its 100-percent investment in Ireland’s DEPFA BANK plc to Austria’s BAWAG P.S.K. AG.

FMS Wertmanagement intends to sell 100% of the shares in DEPFA BANK plc in an open, transparent, competitive and non-discriminatory auction sale process.

In winding up the DEPFA Group, Hybrid capital bonds as a value lever fully utilised.

As already announced in May, Christoph Müller assumes the role of Spokesman and CEO of FMS Wertmanagement.

FMS-WM is able to sell the first of the three hybrid capital bonds with a nominal value of around EUR 500 million to the DEPFA Group.

The cumulative wind-up of the portfolio surpassed the EUR 100 billion mark.

The nominal volume of the portfolio was reduced to EUR 87 billion, which brings it to less than 50 percent of the transferred value for the first time.

As already announced in April, Stephan Winkelmeier takes over as Spokesman of the Executive Board and Chief Risk & Financial Officer of FMS Wertmanagement.

In a joint transaction with DEPFA BANK plc in Dublin, FMS Wertmanagement successfully completes the tender offer and purchase of three bonds with an aggregate nominal value of EUR 1.2 billion for a total consideration of EUR 741 million.

The tender for the privatisation of shares of FMS Wertmanagement Service GmbH starts officially.

FMS Wertmanagement establishes a service entity as a wholly owned subsidiary that, no later than September 2013, when the cooperation agreement with the HRE Group on the servicing of the portfolio in accordance with EU requirements has  to be terminated, will take over most of these functions.

FMS Wertmanagement announces its intention to participate in the exchange of Greek government bonds and loans with a nominal value of EUR 8.2 billion.

The HRE Group applies for establishment of a winding-up institution.

The Parliament of the Federal Republic of Germany moves to establish SoFFin based on the FMStFG.

The HRE Group encounters such serious financial difficulties that it faces going-concern risiks.

The HRE Group took up this offer and applied to have FMS Wertmanagement established.

FMS Wertmanagement is not a bank, nor a financial or an investment services provider nor an insurance company as defined in the German Banking Act or EU Directive 2006/48/EC. For this reason, it may not enter into a new business unless such new business concerns transactions directly and solely related to the portfolio’s unwinding.

Under agreements dated 29 and 30 September 2010, risk positions and non-strategic operations of the HRE Group with a nominal value of around EUR 175.7 billion – excluding derivatives – were transferred to FMS Wertmanagement effective 1 October 2010.

The transferors, pbb and HRE, transferred risk positions and non-strategic operations to FMS Wertmanagement, partly by way of a spin-off into an existing company, in accordance with Section 8a (1) and (8) FMStFG in conjunction with Section 123 (2) No. 1 and Section 131 of the German Reorganisation and Transformation Act (Umwandlungsgesetz – UmwG).  The risk positions and non-strategic operations that were not transferred by way of the spin-off were transferred to FMS Wertmanagement by way of a subparticipation, assignment, novation or guarantee.  Which approach was chosen depended on the different legal, regulatory and tax requirements of the respective countries governing the respective transaction.  What is common to all means of transfer however, is that FMS Wertmanagement assumed the financial risk of the risk positions and non-strategic operations.  The spin-offs from HRE and pbb were recorded in the respective German Commercial Register on 2 December 2010 for HRE and pbb as well as for FMS Wertmanagement. 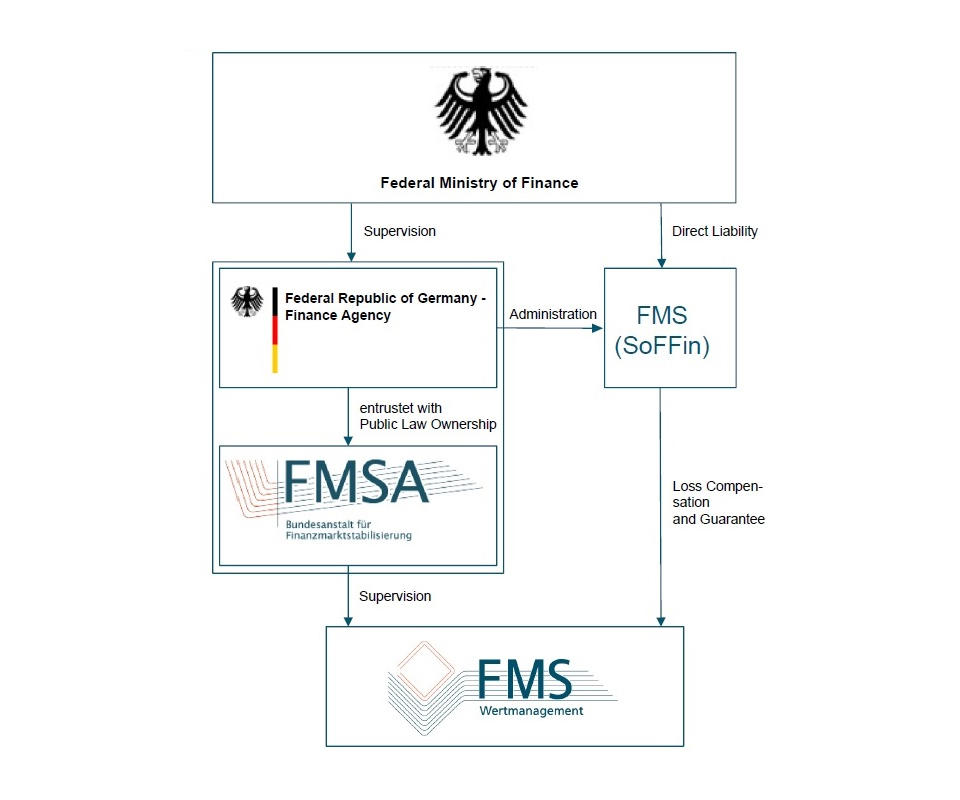 In its capacity as the legal regulator overseeing FMS Wertmanagement, German Federal Agency for Financial Market Stabilization (FMSA) has comprehensive information, controlling, audit and instruction rights. It approves revisions of its wind-up plan and is integrated into decisions of strategic importance in respect of its business activities. FMS Wertmanagement regularly reports to FMSA on its current activities and submits its annual financial statements and management report as well as the audit report to it. According the FMSA Reorganisation Act the Federal Republic of Germany – Finance Agency (Finance Agency) gets entrusted with maintenance of the FMSA. The administration of the Financial Market Stabilisation Fund (FMS or SoFFin) was assumed by the Finance Agency.

Furthermore in matters of particular significance under the Executive Board’s purview, the Supervisory Board may reserve decision-making authority for itself on a case-by-case basis or in general. This shall not affect the authority of the Executive Board to represent FMS Wertmanagement externally to legal effect.

Members of the Supervisory Board

The Executive Board shall have at least two members who are appointed by the Supervisory Board with FMSA's approval for terms of no more than four years; they may be reappointed however.

Christoph Müller is Chief Executive Officer and Spokesman of the Executive Board of FMS Wertmanagement since 1 July 2019. Before that, he already held the position of Chief Risk Officer and Chief Financial Officer of FMS-WM since September 2017.

After studying business administration with a focus on banking at the University Villingen-Schwenningen, he worked from 1994 until 2001 as credit specialist and consultant for corporate customers at the Volksbank Dreiländereck and the Baden-Württembergische Bank in Lörrach. After working three years for UBS AG in Zurich as a Transaction Manager in the field of Credit Portfolio Management, he moved on to Credit Suisse, Zurich, in 2004, where he held various leading positions in the units Credit Portfolio Management as well as Credit Risk Methods and Models. Since November 2010, Christoph Müller has held the position of Head of Risk Controlling, Finance & Portfolio Steering at FMS-WM.

A trained lawyer specialising in banking and capital markets law, she began her career in restructuring and reorganisation at Commerzbank AG in 1999. Between 2005 and 2011, Ms Falkner worked for Hudson Advisors Germany, where she was responsible for winding up non-performing loan portfolios. Since May 2011, Carola Falkner has held several positions at FMS Wertmanagement, including Head of Commercial Real Estate.

The nominal value of the assets transferred was EUR 175.7 billion at the transfer date.

Including derivatives, this comprised more than 12,000 individual exposures with about 2,500 different counterparties.

FMS Wertmanagement is not a credit institution or financial services institution under the German Banking Act and thus does not need a banking licence and is not subject to any regulatory capital adequacy and liquidity requirements.

FMS Wertmanagement does not engage in any active new lending or deposit business.

FMS Wertmanagement may engage in banking and financial services transactions serving to unwind the portfolio transferred to it.

FMS Wertmanagement is supervised by the Federal Agency for Financial Market Stabilisation (FMSA), which has extensive information, controlling, audit and instruction rights.